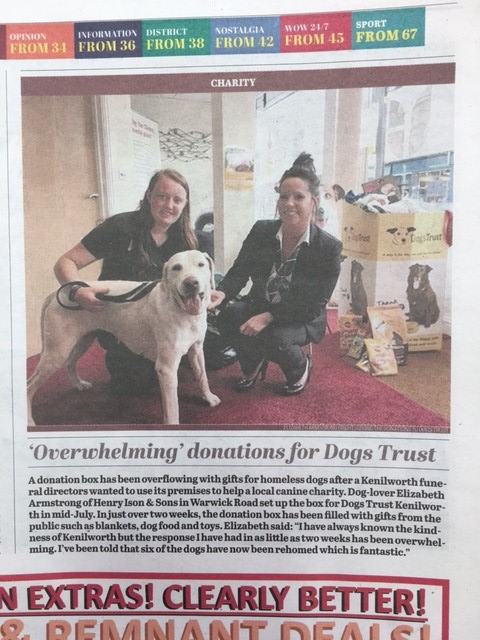 A donation box has been overflowing with gifts for homeless dogs after a Kenilworth funeral directors wanted to use its premises to help a local canine charity.

Dog-lover Elizabeth Armstrong of Henry Ison & Sons in Warwick Road set up the box for Dogs Trust Kenilworth in mid-July.

She also used the shop’s window display to show pictures of dogs that need rehoming.

In just over two weeks, the donation box has been filled completely with gifts from the public such as blankets, dog food and toys.

The items were handed over to Dogs Trust on Friday August 4.

Elizabeth said: “I have always known the kindness of Kenilworth but the response I have had in as little as two weeks has been overwhelming.

“I’ve been told that six of the dogs from this have now been rehomed which is fantastic to hear.”

Supporter relations officer for Dogs Trust Kenilworth, Helen Barlow, said: “On behalf of the 100 dogs currently at Kenilworth, we are so grateful for the support of Henry Ison and the general public for their kind donations.

“Being able to snuggle into a lovely blanket or play with a new toy helps us make the dogs as comfortable and as happy as possible whilst they are with us.

“Collections like this are vital and we want to say a huge thank you to the team at Henry Ison for making a huge difference to every dog we look after.”

Elizabeth said she would like to use the premises as a donation bank for other charities in later months.

Hope at the end of the rainbow